Know Your Enemy: Columbus Crew, Meeting the First - Part One – The Lineup and the Form

The first installment of Waking the Red's long-running Know Your Enemy series, previewing TFC's upcoming opponent, the Columbus Crew, looking at their lineup and form

Share All sharing options for: Know Your Enemy: Columbus Crew, Meeting the First - Part One – The Lineup and the Form

As if long-time Toronto FC fans needed reminding, extrapolating from a small sample size of early results is a dangerous game – don’t believe the hype; yet, anyways.

The more impressionable will have suffered mightily at the highly-foreseeable result in Salt Lake; Toronto was thoroughly outplayed, their lack of depth was exposed, while planning – both tactical and travel – exhibited limitations and flaws.

And Saturday, when the club travels to face mild-rivals, the Columbus Crew, does not portend much better.

Jermain Defoe’s hamstring, Julio Cesar’s knee, Jonathan Osorio and possibly Doneil Henry’s hamstrings, as well as the Disciplinary Committee decision to suspend Steven Caldwell, will see anywhere from three to five of their starting eleven absent from the pitch, while Michael Bradley will rejoin the club post-USA-Mexico friendly with another ninety minutes under his belt – impressive though his night may have been (with a goal and an assist; good for the confidence after the tabernacle debacle), an extra outing may sap some of the exuberance from the clean-headed menace. 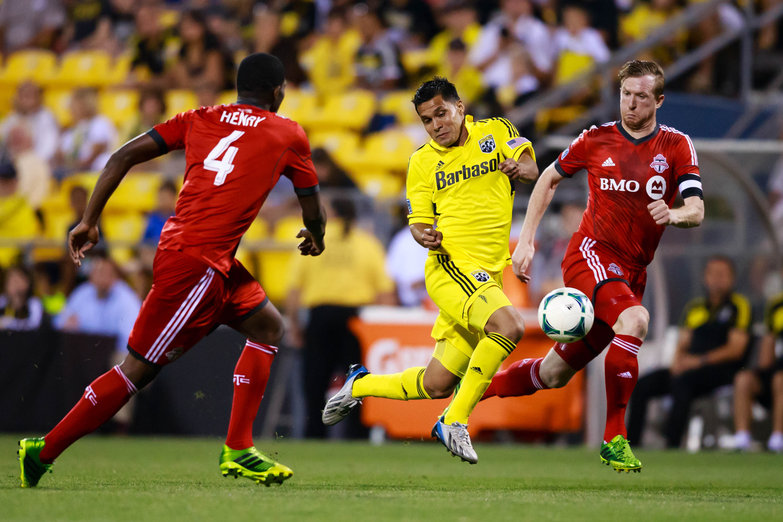 As if those concerns were not enough to dampen the spirits, they prepare to face a Columbus side that has been rejuvenated under the guidance of new head coach, Gregg Berhalter.

The Crew are the lone remaining perfect side in MLS, having won all three of their matches in 2014 and will present a serious challenge to a Toronto-side that hopes to rebound from disappointment, lest they risk losing two-straight.

The key to MLS success is not so much dominance as consistency, nothing diminishes the chances of moving on to the playoff rounds like losing streaks, and while it is still very early, that shadow looms for TFC.

So what to expect from Saturday’s opponent?

A closer look at the Columbus Crew is in order…

For all their early season success, the story in Columbus has been less-revolution than evolution.

Granted with the purchase of the club by Anthony Precourt midstream last season and the departure of Robert Warzycha at the end, there have been some significant changes, but rather than entirely overhaul the side, Berhalter has kept much of the roster intact, instead supplementing the quality in place with select reinforcements.

Perhaps the most-striking change from recent iterations of the Crew was the departure of centre-back and captain, Chad Marshall – who has led the team as long as TFC has been in the league (since 2004 actually). He was traded to Seattle in the off-season, where he reunited with former coach, Sigi Schmid.

Gone too are long-time servants such as Eddie Gaven (shockingly retired), Danny O’Rourke (option declined), and goalkeeper, Andy Gruenebaum who was traded to his hometown side, Kansas City.

In to replace have come some names that should be familiar to MLS watchers – US International and former Revolution defender, Michael Parkhurst; midfielder Hector Jimenez, formerly of LA – and a handful of new recruits – goalkeeper Steve Clark, World Cup-bound Costa Rican left-back Waylon Francis, and fellow Ticos defender, Giancarlo Gonzalez.

Their projected starting lineup is as follows: Steve Clark in goal; from right to left – Josh Williams, Giancarlo Gonzalez, Michael Parkhurst, and Waylon Francis across the backline; Wil Trapp and Tony Tchani sitting at the base of the midfield; with Hector Jimenez and Bernardo Anor in the outside positions; Federico Higuain will operate from the top of the midfield, in the hole behind striker Jairo Arrieta. Berhalter does have plenty of options with which to tinker. Dominic Oduro started their last match in Seattle, but is dealing with a dead-leg (Charlie Horse in North American parlance) after a stiff tackle from Djimi Traore, putting his availability in doubt.

Justin Meram has been limited to minutes from the bench thus far, but his stoppage-time winner will have him in contention for more, likely in one of the wide midfield positions, while a host of defensive options – Chad Barson, Tyson Wahl, Agustin Viana, and Eric Gehrig – have yet to really feature this season.

If necessary, towering forwards Adam Bedell and Aaron Schoenfeld can provide some height in the box, while Ben Speas, Ethan Finlay, and Ryan Finley are additional darting attack options.

Columbus opened the season with a 3-0 victory away to DC United.

Arrieta scored the first in the 18th minute, touching in a Josh Williams ball behind the DC defense after a sweeping attack down the right side. Higuain added a second in the 27th minute from the penalty spot after Perry Kitchen obstructed Parkhurst on a free-kick and notched the third in the 90th minute from some good work down the left from Francis that saw Meram pull back from the end-line to set up the Argentine maestro at the top of the box.

After a week two bye-week, the Crew opened their home schedule against Philadelphia, winning 2-1 in a renovated (new fire-free scoreboard and all) Crew Stadium.

Venezuelan Anor provided a first half brace, heading in a Higuain corner kick at the back-post in the 24th minute having escaped his marker and smashing in along-range drive in the second minute of stoppage-time that sailed past Zac MacMath in the Union goal.

Leo Fernandes would pull one back in the 62nd, tapping in a Sebastien Le Toux goal-mouth ball, but Columbus would see out the result.

This past weekend, they returned to the road for the Sigi Schmid-derby, facing their former coach and his new team in Seattle.

The Sounders would take the lead through Kenny Cooper in the 22nd minute, taking advantage of the visitors committing forward to strike on the counter, finishing across the keeper from the left.

But a 58th minute red card and penalty concession from Traore handed the lively visitors a chance to level, which Higuain did neatly, converting his second penalty kick of the young season.

Up a man, the Crew pressed for an equalizer that would not come, and the Sounders looked to have seen out the result, until a momentary lapse of concentration in the 94th minute allowed Higuain to alertly play a short corner to Meram at the corner of the area, his seeing-eye shot sailed over the stunned crowd in the box and found the top corner of the goal for a late winner.


Part Two, going over the game film for strengths and weakness, is in the works, be sure to come back and give it a read.