Some timely defending, some smart runs, and some errors by the Columbus Crew all played a role in the buildup to Michael Bradley's first ever goal for Toronto FC. His tight angled finish is certainly worth a closer look to see how it came about.

Michael Bradley is very good.  He proved it again on Saturday night against the Columbus Crew as he opened his MLS scoring account with a simple finish from a tight angle.  His goal proved to be the game winner for TFC in a rare road victory at Crew Stadium.  It also capped off a very good week for the American midfielder who had already notched a goal and an assist against Mexico midweek.

The finish itself on the goal was a very simple one despite the tight angle that the shot came from.  Bradley had his head up as he ran into the box and knew what his options were going to be by the time that he caught up to Mark Bloom's pass just before the goal line.  With no other TFC players available as a passing option Bradley decided to drag the ball towards the far post which was by far the most dangerous thing he could do with it.  Even if Steve Clark were to get down and stop the shot the chances of him spilling something in a dangerous area were high given the angles involved.  Luckily for Bradley though Clark seemed to get caught in two minds between dealing with Bradley's potential shot and being prepared for a ball to be played back in to the middle of the area.

Despite the finish being straight forward the goal does not happen if Bradley does not read the game better than almost anyone else in MLS.  The play actually starts to develop over a minute before the ball finds its way in to the back of the net.

More: From pre game to post, read all our coverage of TFC vs Crew in this handy storystream

The build-up to Bradley's opener began down in the corner when Alvaro Rey dribbled in to a tight space with two Crew defenders on him.  He is dispossessed by Josh Williams and the ball is played inside to one of the centre backs for what probably should have been a safe clearance out in to touch. 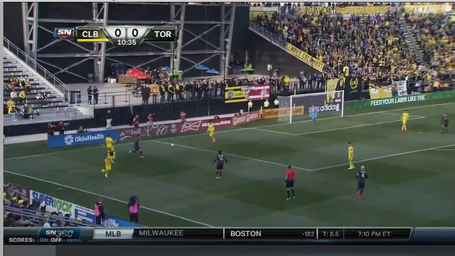 Instead, as you can see, the Crew defender takes a touch on the ball and suddenly TFC are able to start defending deep in Columbus' end with Rey, Dwayne De Rosario, and Bradley all in position to make any pass out of the back line much more difficult.  When the ball is played out of the back, it is weak and goes right to the feet of DeRo who now has a bit of space to start to move into a more dangerous position.

As DeRo looks inside he now has options to work with.  Next to him is Bradley who is drifting towards the middle and is in space, he has Kyle Bekker just moving up in space to join the play as an outlet, he could look to swing the ball in back post to Gilberto, and he has Jackson coming in off the far wing and making a run towards the top of the 18-yard area.

DeRo picks the last option and though Jackson managed to beat Tony Tchani to the ball the Crew midfielder does enough to make sure that he is not beaten cleanly.  As Jackson makes his way in to the area Tchani continues to stay right on his heels and eventually gets help from one of the defenders and Jackson is stripped of the ball without ever having a chance to get a look at goal.  For the second time in the series the Crew now have a chance to clear the ball but TFC again have bodies in many of the passing lanes.  It is the work of Jackson though that causes the problems here as he continues through with the play and ensures he is not cleanly dispossessed and rather than the Crew defender collecting the ball with a chance to clear it the ball bounces off the defender and heads towards the top of the box. 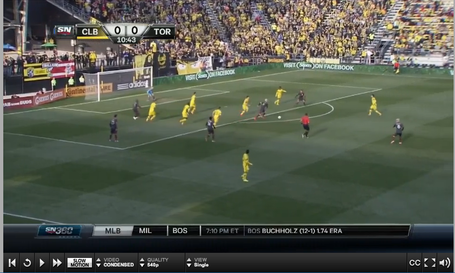 Waiting at the top of the box is Bradley who had continued to follow the play after DeRo played the ball central to Jackson.  He gets to the ball first but is quickly closed down which limits the options that he has to work with on the play.  The closest player to him is Gilberto but he is also closed down so Bradley tried to play the ball over top of him and in to space on the right flank for Bloom to run on to as he pushes forward from his defensive position.  The ball is not hit wide enough though and is easily cut out by the defender.  Another chance for the Crew to clear but the scissor kick effort by the defender only relieves the pressure for a short period of time.

The clearance falls right at the feet of Justin Morrow who is quick to play the ball back in deep to continue the pressure on the Crew.  His pass does find Bloom who is in space on the wing with plenty of room to take a touch before sending in a cross.  With Jackson, DeRo, and Gilberto all ready and waiting at the top of the 18 a cross would have been a good option for Bloom but that is where the awareness of Bradley really came in to play.

Rather than a hopeful cross into the area where all three attackers were being picked up Bloom winds up hitting a simple pass in to space at the urging of Bradley.  Bloom does have to put a fair bit of pace on his pass though to ensure that it gets past the defender and finds that open space.  As the ball rolls in to space it becomes clear that none of the Crew midfielders are going to track back and stick with Bradley who has plenty of room to look up before he gets to the ball.

What Bradley would have seen when he looked up was three TFC attackers in the middle but also three yellow shirts in position to make any pass across the face of goal tricky.  He would also have seen that the Crew goalkeeper, Steve Clark, was hugging his post to take away any chance of Bradley firing in a quick shot to that side of the goal.  That left one option open to Bradley who apparently understands angles very well, to go back post with a low shot.  Best case scenario is that he finds the far corner of the net but he could also cause Clark and the defenders problems should the shot take any sort of deflection with so many TFC attackers ready to pounce. 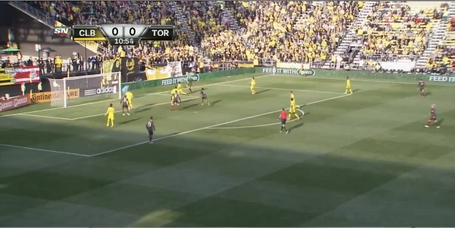 By the time Bradley gets to the ball and takes his shot he is about one yard out from the goal line, has a defender closing him down hard, and has to take the shot first time.  It is the kind of finish that often winds up rolling harmlessly through the area and never finding the back post but Bradley got his angles just right and his shot ends up hitting off the inside of the far post and settling in to the back of the net.

It was a goal that developed over the course of a minute and included the Crew having three different chances to get the ball away from the danger area.  A few instances of Toronto having a player in the right place at the right time, a few good passes, several good runs, and finally a classy finish and we had the opening goal in Columbus.  In the end, the Crew (and Clark in particular) will be kicking themselves for not doing a better job on this goal but it was good work for Toronto to make them pay for it.

Based on his performances this past week this probably won't be the last Michael Bradley goal that Toronto FC fans get to celebrate this season.