Know Your Enemy: New York Red Bulls – Meeting the First, Part One – The Lineup and the Form

The latest installment of the Know Your Enemy series, previewing TFC's next opponent, the New York Red Bulls, highlighting their lineup and form heading into Saturday's match

Share All sharing options for: Know Your Enemy: New York Red Bulls – Meeting the First, Part One – The Lineup and the Form

Less than 60 hours or so after defeating the Vancouver Whitecaps on penalty kicks in the opening round proper of the Voyageurs Cup (Amway Canadian Championships, to give the sponsors their due), Toronto must fly back across the continent and reassemble tfor a difficult match against New York on Saturday afternoon.

An extra half hours’ worth of energy, expended on the concrete quicksand in BC, was not the most fortuitous start to TFC’s climb back into the Eastern Conference picture. Three-straight losses (four of their last five), has seen the early season elation dissipate: it is far from the time for panic, but the struggles remain cause for concern.

Shoots of green amongst the rabble should provide encouragement – their ball movement in possession, especially against New England, was a positive sign, but the tendency to overplay in the final third and inability to take the chances that come must be rooted out as soon as possible. 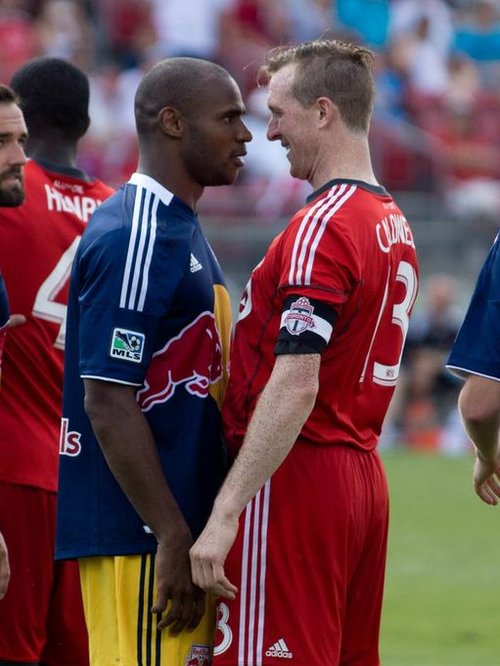 As oft stated, this peculiar opening phase of the season, with its regular byeweeks and cross-conference matches, gives the club a certain leeway through the first three months of the season – their campaign will begin in earnest at the end of June, when the World Cup breaks ends, and they resume for the long run in, neatly, with another match against New York.

In their second season under Mike Petke, New York, after a slow start, have climbed up the table in recent weeks and currently sit in fifth place in the East on fourteen points from eleven matches.

Alrighty then; a closer look at this weekend’s enemy, the New York Red Bulls, is in order…

As the defending Supporters’ Shield champions – their first major honour – before falling out of the playoffs at the hands of Houston in the first round, New York made very few charges in the off-season.

After tinkering around with trying to work in their off-season acquisitions – Armando is the only one to have held a regular spot, Petke has gradually reverted to a lineup that is very similar to last season’s first-choice side.

Stifling his options come Saturday is that both of their World Cup-bound starters, Australia’s Tim Cahill and Costa Rican Roy Miller, have reportedly already left the club to join up with their respective national teams and will not be available.

That said, their projected lineup is as follows: Luis Robles in goal; from right to left – Kosuke Kimura, Jamison Olave, Armando, and Bobby Convey across the back; Lloyd Sam, Dax McCarty, Peguy Luyindula, and Eric Alexander through the midfield; with Bradley-Wright-Phillips and Thierry Henry paired up top. Petke does have several options.

Kimura did not look at his best in their most recent match against Chicago – a true barnstorming romp of a goal-fest – and it is possible that Eckersley will be drafted into the right-back spot. Never hurts to field a player against his former side.

Miller has virtually locked down the left-back position and his absence will be of concern. Convey has filled in there, but Conor Lade is another option, though Petke has really limited his minutes, despite the young player’s rise to prominence in his rookie season, earning a place in the hearts of local fans.

Should either Olave or Armando be unavailable, Ibrahim Sekagya, is a solid replacement, while young homegrown defender, Matt Miazga, is more one for the future.

In the midfield, the only likely option is to move Alexander into the middle in place of Luyindula to pair with McCarty, opening up the left-flank for Johnny Steele, though Convey could be a candidate for that side as well.

New York will enter the match hungry to put behind them that crazy loss, by the odd-goal in nine, at home to Chicago on Saturday. What really rankled was how Chicago got on the board, with a controversial goal from Harrison Shipp after just four minutes.

Mike Magee was offside and appeared to put off keeper Robles as Shipp low cross skipped into the right-side of the goal, but much to Petke and Co.’s chagrin, the goal stood.

Cahill would respond two minutes on with a trademark header from a left-sided Alexander cross to the back-post and Wright-Phillips, scoring in a fourth-straight match would hand the home side the lead before half-time, with a 39th minute finish after Henry intercepted a loose pass in midfield and blistered past defender Jhon Kennedy Hurtado before squaring to his strike-partner.

But a slow start to the second half would haunt New York, conceding three goals in nine minutes before reaching the hour-mark and then a fourth in the 64th, turning their one-goal lead into a three-goal deficit – Quincy Amarikwa notched the first, before Shipp rounded out his hat-trick.

Wright-Phillips would snatch a hat-trick of his own, scoring in the 67th minute and again in the 78th, from the penalty spot after Henry was wrestled to the ground by Hurtado – he has eight goals in their last four matches.

The loss ended what had been a solid resurgence for New York.

They went winless through the first six matches, losses away to Vancouver (4-1) and DC (1-0) bookending a run of four-straight draws before picking up their first victory in the middle of April, 2-1 at home against Philadelphia.

The following week they added another win, with a 4-0 dismantling of Houston at Red Bull Arena – on a Wright-Phillips hat-trick and another from Henry, before returning to the road for a match in Columbus, which they drew 1-1 – Jairo Arrieta and Bradley Wright-Phillips exchanging goals either side of half-time.

The road trip continued with a tricky away fixture in Dallas, where New York departed as victors, thanks in part to an early red card to Je-Vaughan Watson, as well as a goal from, yup, Wright-Phillips.

But that four-match unbeaten run was ended with the high-scoring affair on the weekend against Chicago – expect a bit of the disappointment from that match to carry over into Toronto.

Part Two will be posted first thing tomorrow morning, reviewing the game film for strengths and weakness, as well as highlighting some points of interest