The MLS World Cup break is coming up, it's time to make a push before the break.

Once again a warning, midweek matches, get your transfers in before Wednesday evening. Also a plug, MLSSoccer.com has a Brazil Bracket Challenge going, which is remarkably easy and non time consuming, just predict before the tournament starts and then there's nothing else to do except watch with glee/agony as everything works out nicely/goes horribly wrong knowing you can't change a thing. if you create a team, then why not join our league, search for Waking The Red, the password is, you might want to get a pen to write this one down cos it's a tough one, password. Got it? Excellent. Now, back to your regularly scheduled fantasy update.

The tug of war for the top spot continued this weekend in the WTR Fantasy League .Duncan Fletcher’s Leiweketywicketywack’s took back first place from Matt Train’s Canadian Bacons.Duncan’s 70 points this round were enough to give him a slight five point edge heading into the next round.For the first time this season there was a tie in the weekly winner category.Upper Echelon FC and Toronto Hammerheads each scored 89 point in the round.Toronto Hammerheads captained Jermain Defoe while he had Diego Valeri roaming the midfield.Upper Echelon FC also played Defoe up top but gave the armband to Valeri.The only other common player between the two squads was Benny Feilhaber who has been a model of consistency this season.

Round 14 is the last round that will have the majority of clubs playing. Every team except the lowly Montreal Impact will take to the pitch at least once this week.Chicago, Colorado, Columbus, Salt Lake all have double game weeks using your two transfers on players from those squads would be helpful.

Don’t worry about using both transfers on players from the teams listed above even if they don’t fit into your long term plans.The next two weeks will be your last chance to fix your squad for free.That’s right unlimited transfers are coming in both rounds 15 and 16.Before you get too excited round 15 has unlimited transfers because only four teams will be playing (Montreal v DC & Portland v Dallas).You then will be able to reset your team for round 16 and the second half of the season. 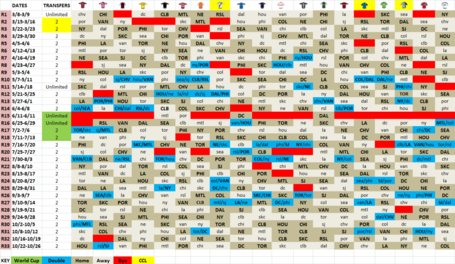 VIEW FROM THE BUNKER

If you have Defoe just keep plugging him into your starting lineup.After a trip to Montreal midweek TFC will pack up and head to San Jose for a Saturday afternoon match against the Earthquakes.The Quakes haven’t really missed a beat offensively without Wondolowski or Alan Gordon so don’t expect a clean sheet out of your TFC defenders.Bendik is still reasonably priced and should at least make your bench.

Here are the top 10 in the WTR League this week: