Morning After: Analysis of TFC's win over Vancouver

Toronto FC got off to a winning start to their MLS season against the Vancouver Whitecaps, and Jake Payne takes a look at the tactics and on field factors that made this win a reality.

Share All sharing options for: Morning After: Analysis of TFC's win over Vancouver

Editorial Note: please welcome Jake Payne to the Waking The Red family. With extensive background in soccer analytics, Jake will be bringing game by game analysis of Toronto FC's performances. On top of explanation, he will visually demonstrate on field trends that helps make or break each game.

Toronto's performance in a 3-1 win over the Vancouver Whitecaps got a lot better to watch as time went on, and turn out to be a great game to start the season with. In general, the first half was pretty rough on Toronto. The Whitecaps came out of the gate literally running, dictating the pace and occupying Toronto's attacking half for almost the full 45 minutes. The half could have gone been a lot worse than 1-1, and that was the brunt of the damage that the Whitecaps could do as the second half's pace worked in favor for Toronto.

When the game slowed down and the midfield could focus less on defending and more on creating opportunity, they looked amazing. Their tactical adaptability was helped by Vancouver looking really tired later on in the game.Here are some things to take away from the game looking back at it statistically and after watching it again.

The rest of the MLS should probably be pretty worried, Toronto's attack is the reason most people won't be able to sleep tonight. Jozy Altidore looked incredibly confident with two shots on goal, both on target, as well as two goals, one from a penalty in the 90th minute. More than just stats, it's very evident in how he looked and moved on the field that he was full of confidence. His first goal involved him displaying some patience and rounding the goalkeeper, something that wasn't seen in the Sunderland era.

The Midfield is as advertised

The Red Scare that is Toronto's midfield was top notch. Sebastian Giovinco, Benoit Cheyrou, Michael Bradley and Jonathan Osorio made turnovers in the midfield early on, but they corrected their mistake at the half when the possession began to turn more in their favor. All together, they made their forwards really happy with nice set up play and an increase in midfield control. If you need any further showing of how great the service from the barbershop quartet was, Robbie Findley scored his first goal of the season already after a slow season in Real Salt Lake last year. Individually, Giovinco, who had 6 shots and an assist, took both of the team's corners and in general gave Vancouver lots of worry with his individual skill, setting a very high bar in terms of where he can go for the rest of the season. The other midfielders looked great as well, but I'm thinking the Giovinco/Altidore connection might be something to really look at down the road.

The Right Side of the Defense Is Worrying

In the first half, when the whole back four was getting slammed, Vancouver evened out the destruction on the wings. In the second half though, they found which side was easier to pillage. Steven Caldwell and Warren Creaville did not lock down the right side as much as they should have, which showed in Vancouver's second half passing picture. 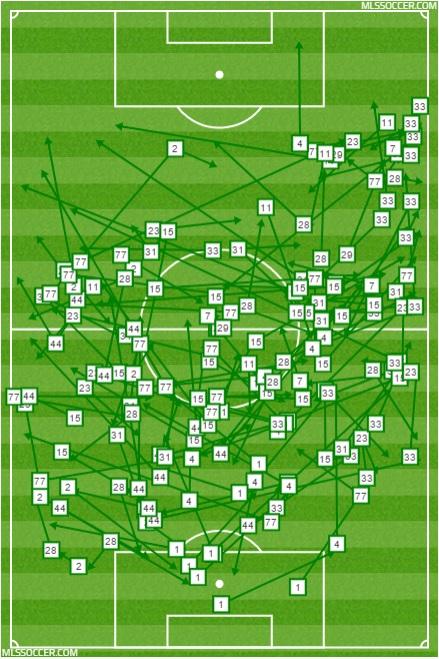 Could it be because Toronto really pushed their defenders up and when facing the speed of Mauro Rosales and Raul Octavio Rivero who were both attacking the right in order for a set up in center, does that create unnecessary pressure on them? That wouldn't explain how Justin Morrow and Damien Parquis had decent outtings without being exposed all game. The question mark comes mainly for Caldwell, but the right side as a whole really has to do better to help the midfield.

Based on this game and the stats on the MLS Matchcenter, Toronto is going to