Current president and CEO of Maple Leaf Sports and Entertainment, Tim Leiweke, is leaving soon. But, the $60 million in upgrades at BMO Field are here to stay. He gave Waking the Red’s Luke Galati an exclusive tour of the new stadium before Sunday’s home opener.

Tim Leiweke wears a hardhat and an orange construction jacket over his white dress shirt. BMO Field is still under construction, so I wear a pair of dorky, clear protective glasses that I’m given. Leiweke, the tour guide for the day wears his Ray-Bans.

He’s the CEO and president of MLSE, so you know that the man mean’s business. But Leiweke casually walks out of the new tunnel, onto the pitch with enthusiasm. You can tell that he’s done this tour a few times before. But, you can also see that he’s genuinely excited. He’s like a kid in a candy store – a candy store that he created and runs.

Looking up from the tunnel, you see the new bleachers. Leiweke tilts his head back and gazes up at the 8,400 new seats towards the East.

He pauses before saying, "This is a European stadium. This was always a quant, cute stadium. We were a cute club. Now we get serious. Now we’re real," Leiweke says, walking onto the grass. 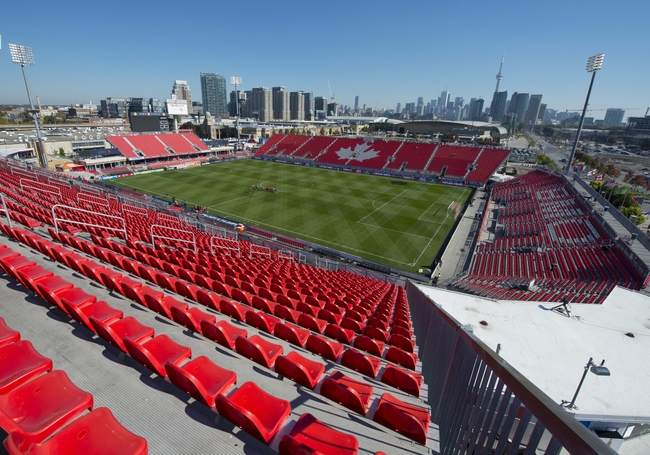 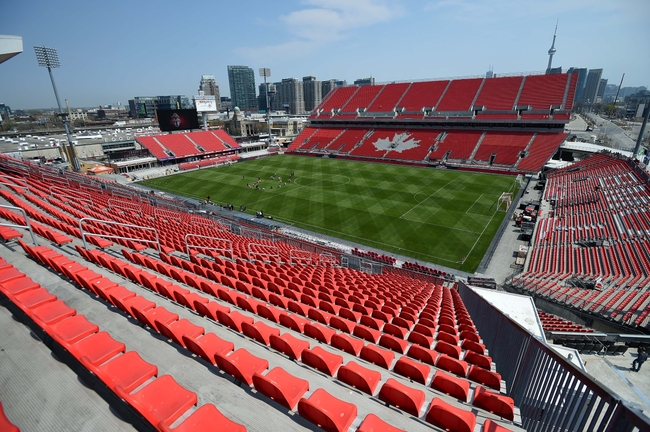 The centre circle is now directly in front of him. He looks up at the stands which he expects to be sold out this weekend. "Imagine it this weekend," he says, filled with 31,000 people at TFC’s home opener on Sunday. "If you’re a player and for the first time Sebastian [Giovinco] or Michael [Bradley], come walking out and all you see is that. It’s pretty amazing."

The Argos and the Grass

With the growth of BMO Field, which is now the largest soccer specific stadium in Canada and America, Leiweke knows that there are some concerns. The Toronto Argonauts are in talks with MLSE to make the newly renovated BMO Field their new home, since when the 2017 season ends, so does the Argos lease at the Rogers Centre.

Leiweke says that the next portion of the tour is for Waking the Red readers in particular, "Because I see all of these crazy comments. We’re getting yelled at."

He points to the turf. "You see the line? You see that second line we put in here?"

The faint line (in the photo above), "We painted yesterday, and we took off with just a water hose," Leiweke says.

He adds that TFC has already invested in a line removal system from Europe. Lines are not the problem that Toronto soccer fans have to worry about, he says. "You will never see lines on this field. This will be a great soccer pitch no matter what else is going on in the building."

As we walk further on the tour he points to a messy room, far from furnished. "That’s going to be a locker room," Leiweke says. "In case we add another tenant. People say that the [Argos] deal is already done, but look at that room. I don’t think so."

Leiweke also says that he has three promises to pass onto TFC fans, which are, "locked in forever," CFL team or not:

1. TFC schedules their games first. They will always have complete control of the stadium.

3. "We will always have grass. And we’re spending $3 million next year to make sure that people understand our pitch is priority number one." He gave his word that BMO field will never stray away from a grass pitch, "Never ever ever ever ever ever."

The Business Impact of an Upgraded BMO Field

Seeing the place, it seems unbelievable that most of the phase one renovations at BMO Field will be complete by Sunday. As we walk past dozens of construction workers putting in overtime, Leiweke says that the progress made every day is remarkable.

He shows the spot where one of the new beer gardens will be in the supporters section come Sunday. Now, he says that the Red Patch Boys and beyond won't have to enter a tunnel, missing part of the game to grab a cold one. For the first time ever they will also be cooking food on site.

But more importantly, as the tour nears completion, he says that what the revamped stadium means for TFC is that, "Our economics now are probably the best in the league."

Leiweke says that the additional seats, suites and revenue sources created from the renovation means, "We can afford Sebastian [Giovinco], we can afford Michael [Bradley], and we can afford Jozy [Altidore]."

For everyone who thinks that TFC is crazy for spending big money on their designated players, he says, "We're not. We want to be in a position moving forward every year, where we always have the ability to spend on those three spots, and reward fans in this marketplace with some of the best players in the world."

Leiweke says that he sees the new size of BMO Field, combined with the ethnic diversity of Toronto's marketplace as an opportunity for TFC to grow. "We don't get that every day in this league."

He points to the other big market cities like New York, where staying relevant can be a challenge. With the Jets, Giants, Mets, Yankees, Knicks, Rangers, Islanders, New York Red Bulls and now New York City FC all fighting for attention, it can be tough. "But here, TFC could be one of the top two or three teams in this marketplace," he says.

Leiweke expects that the upgrades will double the club's annual revenue generated for 2015 when compared to where the team was two years ago. "That puts us in a position where we're probably number one in the league of total revenue," he says.

The tour is now complete, and Leiweke walks into the new Rogers Club, takes off his hardhat and says that this Sunday's match against Houston will be special. He says that it signifies more than just a game because of what the new field represents for the team. "It will be a unique moment for this club, giving us the resources now to be a super club."

Leiweke won't be around and in charge of MLSE next April, when another $60 million will be spent and the second half of the renovations are set to be completed. But, he says that once the roof is in place and the job is finished, "They said they'll let me come back and look at it when it's done."