The young player tasked with filling the boots of Alessandro Del Piero at Juventus has emerged from his shadow a long way away.

Share All sharing options for: Sebastian Giovinco has found home in a place he never expected it to be

David Trezeguet smiled, pointed and caught a leaping Sebastian Giovinco in his arms. Seven seconds earlier he had been casually lurking behind a defender, with another three points already in the bag for Juventus, when Giovinco avoided three Bologna players and deceived another with a through ball that ran at angle that hadn’t seemed to exist moments earlier. Trezeguet had broken into the beginnings of a sprint before he realised a couple of languid strides would be all he needed to reach the pass and apply the simplest of finishes.

Giovinco returned to his feet and applauded the Juventus fans but Trezeguet did not let go, instead holding Giovinco - nearly a full foot shorter than him - from behind and guiding him towards the stands. The Frenchman, a winner of two Scudettos with Juve as well as a World Cup and a European Championship with his country, then slapped Giovinco on the chest as if to tell the supporters to remember the 20-year-old, making his first-team debut, they were looking at.

They did not really need the direction. Giovinco, Claudio Marchisio and Paolo De Ceglie were widely regarded as the future of Juventus, and the former the kind of precociously gifted No.10 who could fill the enormous boots of Alessandro Del Piero.

There was just one problem: then 32, Del Piero was showing no signs of slowing down. He was the top scorer in Serie B that year, would net more than 20 goals in each of the two following seasons, and dominated the newspaper columns after that Bologna game by scoring the first two goals in a 3-1 victory that left the Old Lady on the verge of the title.

Giovinco is quiet. On the not-too-frequent occasions on which he is the subject of a media scrum after training or a match, he speaks through a translator and keeps his answers short and textbook. He is certainly not surly or uninteresting, but if he had any great desire to express himself off the pitch he probably would be doing so in English by now after nearly two years in Canada.

Social media provides more evidence of an introvert. Giovinco does not maintain public Facebook or Twitter accounts, instead preferring to give fans a glimpse of his private life by posting photos on Instagram, usually with very brief captions or none at all. “Proud,” he wrote after Toronto FC had secured their place in the MLS Cup final. “Reds,” was the message before the second leg against the Montreal Impact. Aside from game pictures, the images he posts rarely feature anyone other than Giovinco himself or his young son, Jacopo.

Last month, he was asked which Toronto player had helped him to settle in to life in Canada the most. “My attitude and the way I am is very independent and never dependent on anyone specifically,” he said. “But certainly the family environment at Toronto FC and in Toronto from everyone I have met has helped me a lot.” 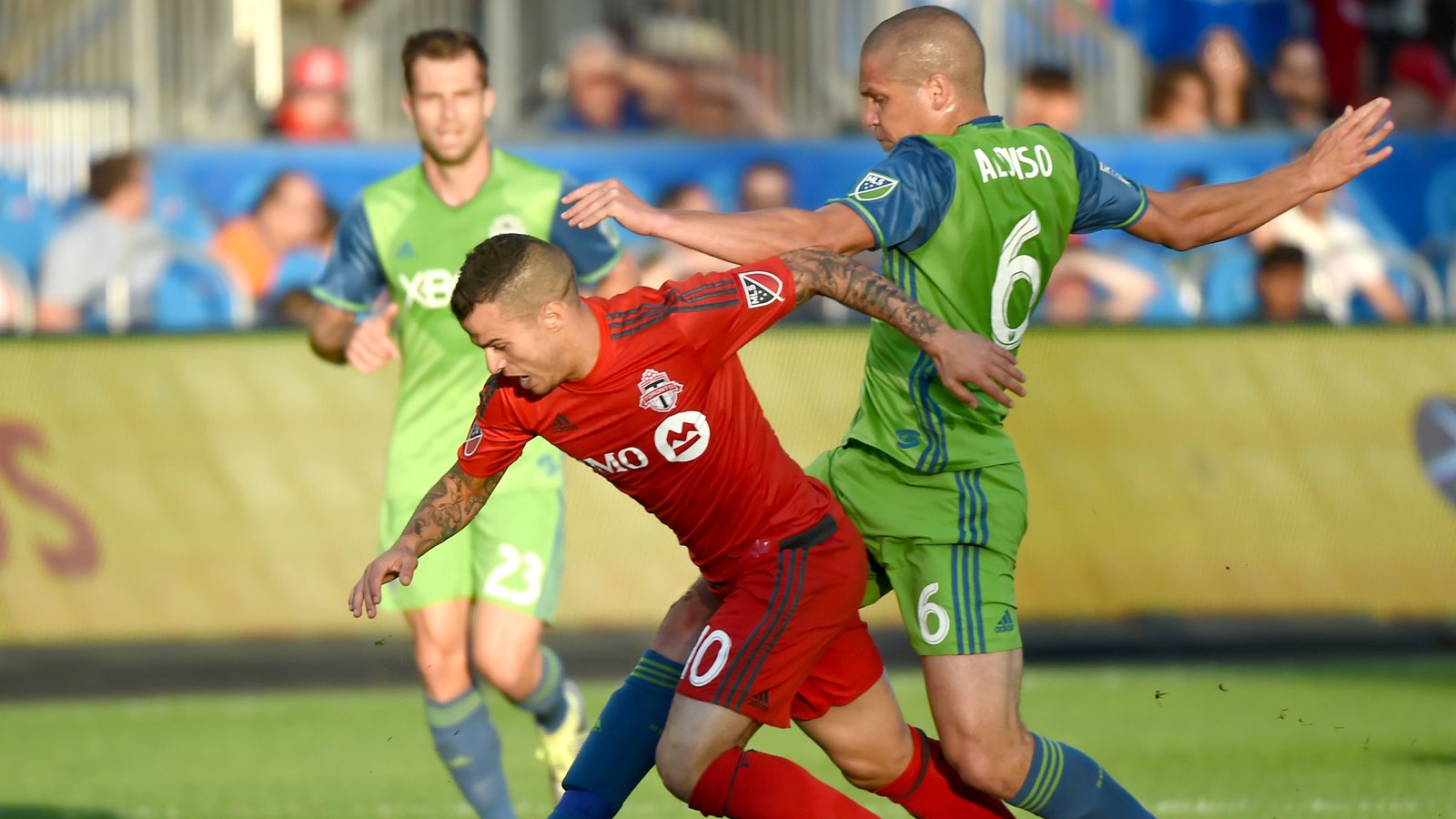 Toronto FC host the Seattle Sounders on Saturday at BMO Field in the 2016 MLS Cup final. It is both clubs' first appearance in the biggest game of the North American season.

This reserved, unassuming man was once asked to replace Del Piero, the second-highest Italian goalscorer in all competitions in history and a rock star who appeared in an Oasis music video, racked up countless sponsorship deals, befriended other sports stars and celebrities and became known for his exuberant goal celebrations.

Giovinco had the natural talent to do it, but never the personality. “The first rule at Juve is that you have to look out for yourself,” he said after signing for Toronto. “Alessandro Del Piero was a good teammate, but the comparisons weighed on me. We have different characteristics and I never compared myself to him, but certain labels are hard to shift.”

Despite being anointed his successor, Giovinco did not point to Del Piero as the player he looked up to most while coming through the ranks at Juventus. That would be Pavel Nedved, the midfielder nicknamed Furia Ceca (Czech Fury) by Juve fans for his style of play on the pitch but who preferred a “simple and normal” life off it.

Nedved liked living in Turin, but did not enjoy the constant, overwhelming attention that came as a result of his status as a star player for the Bianconeri. “In no other country is football lived like it is in Italy, almost to the point of overkill,” he said. “There is too much football on TV and in the papers, there is always talk about football during the week.”

While Giovinco generally keeps himself out of the public eye like Nedved, he can be piercing when he does have something to say to the wider world. “What will I miss about Italy?” he considered after his move to MLS was confirmed. “Certainly not the endless slow-motion replays or controversy over referees.”

At that point, when he became the first top-class player to make the move to MLS in his prime, Giovinco was under fire in his home country like never before. He had become an easy target for criticism from Juventus fans as a result of his failure to become the player they wanted him to be, and his decision to take the huge contract on offer in Toronto was, to them, final confirmation that he lacked the ambition to scale the heights Del Piero had reached. Even when he was playing well, Giovinco was accused of not scoring enough goals in important or close games.

After he had landed in Toronto, he bit back. “In Italy, I had many problems,” he said. “They were all talking about me as a player who couldn’t play at a high level, but I always demonstrated with facts that was not correct. I wanted to find a city, a team, that from the beginning welcomed me.”

The suggestion Giovinco lacked the stomach for the fight at Juventus never added up, because after leaving the club to join Parma on loan and then in a co-ownership deal he later came back for a second bite of the apple in Turin.

Juve repurchased Parma’s half of his rights for €11 million after he had scored 15 goals and provided 11 assists during the 2011-12 Serie A season. It was a Del Piero-esque campaign; only Fabrizio Miccoli, who is also very small and had also tried and failed to become a star at Juventus, compared to Giovinco in terms of not only scoring goals but creating them. Giovinco created the second-most chances from open play in the division, placing behind only Zlatan Ibrahimovic and ahead of the likes of Francesco Totti, Andrea Pirlo and Marek Hamsik.

“I wanted to find a city, a team, that from the beginning welcomed me.”

When it didn’t work out for a second time at Juve, a player lacking ambition would have dropped back down to one of the Italian top flight’s mid-table teams, where Giovinco could have been adored as the best player and enjoyed the rest of his career. In terms of trophies, his team might take a run at the Coppa Italia or play in the Europa League.

But Giovinco wanted more, and looked further afield. He was never going to be particularly suited to the Premier League, though, and La Liga and the Bundesliga were dominated by the big powers of European football, all of whom had settled starting lineups and were looking for world-class finished products, not mid-2os late bloomers looking to realise their true potential.

Then the call came from Toronto.

When Giovinco was unveiled as a Toronto FC player, both he and his agent Andrea D’Amico were keen to project the message, amid the predictable criticism that he had signed up simply for a big payday, that he was motivated to grow MLS and professional soccer in Toronto.

“He was looking for a new motivation to be happy,” D’Amico said. “In Europe, you can have a nice contract, but there are no projects.” “I came here to win and leave an important mark with this team and this league,” Giovinco added.

Giovinco, as a complete newcomer to Canada, never really could have pictured what that might entail. He would have had no true idea of the history or dynamics of soccer in Canada, or even its place in the wider Toronto sporting landscape. He would not have known anything about the efforts to establish a professional Canadian league, nor the state of the senior national teams. 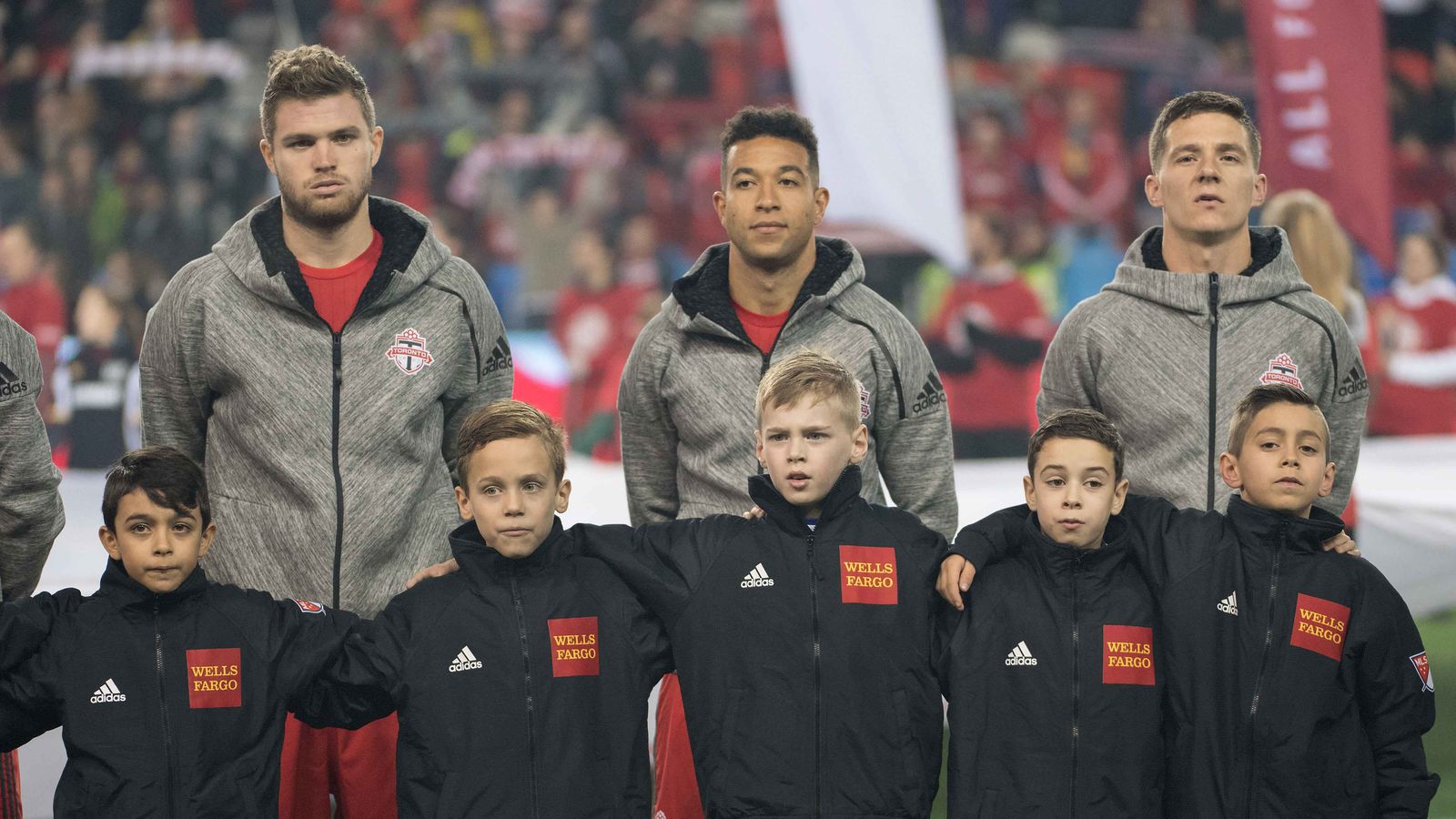 Bigger press scrums than usual aren’t bothering the Reds ahead of Saturday’s final.

That is not to say, however, that his words were false or simply what he thought TFC fans wanted to hear. It was just that rather than being based in some attachment to Canadian soccer that he never could have developed, they were personal. Giovinco was not the new Del Piero, but that does not mean he did not want to be something.

When his gut told him he might find what he was looking for in Toronto, a long way from the preconceptions and expectations he had faced in Italy, he was right.

On Saturday, when Toronto FC take on the Seattle Sounders for the MLS Cup, he will play in front of 36,000 fans - not many fewer than Juventus average - for the league championship as the league’s best player. In a city that, outside of a dedicated group of loyal fans, barely paid attention to its soccer team two years ago, he has become a sporting icon. He will leave one day as the club’s best-ever player and the best player they are likely to have for some time. Just like Juventus and Del Piero, whoever Toronto bring in to replace him probably won’t quite be the same.

On Saturday, it will be bizarre to think that Giovinco was castigated for not choosing Torino or Fiorentina, and perhaps a few minutes off the bench at Euro 2016, over what he has now. The boy Trezeguet lifted is making the indelible mark that was always expected of him, even if the place he has found he belongs is a long way from where he might once have thought it to be.

Toronto FC vs. Seattle Sounders: All our MLS Cup coverage

Next Up In Soccer