Stick with what you know.

Share All sharing options for: Predicting Toronto FC’s lineup against the Seattle Sounders

Well, they did it.

Toronto FC are back in the MLS Cup final, 364 days after their first appearance (no, I didn’t have to look up the date). This is where we see if the lineup additions they’ve made can get them farther than their 2016 squad.

After coming so close to beating the Seattle Sounders a year ago, Tim Bezbatchenko and the rest of his front office set out with the purpose of taking their team that tiny step forward. Time to put them to the test.

At several points throughout these playoffs, Greg Vanney has experimented with his lineup, switching between three and four at the back (often in the middle of games). I don’t expect him to do anything too wild with his starting XI on Saturday - the margin for error is far too slim in a single elimination game.

I’d expect to see him start with the tried-and-true 3-5-2 that TFC rode to the Supporters’ Shield this season. I certainly wouldn’t be surprised if he switched to four at the back mid-game, of course, if the Reds need a goal; it’s a good way of catching the opposition off guard.

In general, I think this’ll be a pretty conservative lineup in terms of selection. Vanney’s not likely to stray too far from the status quo, with everyone (relatively) healthy.

Nobody came forward with any good U2 puns I can use (probably for the best).

Although the Columbus Crew did have a decent amount of chances last week, Bono’s workload wasn’t actually all that heavy. The Crew managed to get just one of their 11 shots on target, and obviously Bono turned it away.

Bono is the first change from TFC’s 2016 MLS Cup lineup.

Drew Moor was insanely good last Wednesday: two tackles, an interception, a clearance, a blocked shot, and 94.6% pass success. Watch him make a great tackle on the edge of half-time and send Victor Vazquez on a nice counter attack:

I’m, as always, conflicted over whether Eriq Zavaleta or Nick Hagglund should get that third spot on the right. Zavaleta did well as the starter against Columbus, but many of Hagglund’s stats were arguably better in his 10 minutes of work — he made three clearances and one pass on four touches of the ball. Zavaleta had three interceptions. Neither made a tackle.

I think Zavaleta will start, just because he seems to have the upper hand in Vanney’s books. That said, Seattle does love the long ball, ranking fourth in MLS with 36.3 successful long passes per game. Hagglund’s aerial expertise might be an asset there.

Chris Mavinga, by the way, is the second change from TFC’s 2016 MLS Cup lineup.

This is the default midfield that’s been part of TFC’s strongest full-health lineup all year.

On Saturday, the wing-backs will probably be a very important piece of the puzzle in Toronto’s attack - if they can use Justin Morrow and, to a lesser extent, Steven Beitashour to unlock the strikers, they may be able to penetrate into the box a little more easily.

Earlier this year, when I wrote an article about TFC’s captain, its draft title until we published it was ‘Michael Bradley rox’. That he does, past Charlie. That he does. Bradley has probably been Toronto’s best outfield player in this playoff run, keeping them on the right side of low-scoring games.

I’m not sure if it was on TV or not, but after TFC did the Icelandic clap thing in the south end last Wednesday, Bradley jogged up and down the goal line clutching the crest on his jersey. If that doesn’t epitomize his time here, I don’t know what does.

This game is, of course, the reason TFC signed Victor Vazquez. Jozy Altidore asked for a creative player, and boy did he get one. He’s proven time and again to be a difference maker in this league, including in the last leg of the conference final (four shots, three key passes, and an assist). He absolutely needs to step up on Saturday, against a team that will undoubtedly be doing their best to stifle the Reds.

If Vazquez has been the crowning jewel for TFC this year, Delgado has been the diamond in the rough. He’s basically house money for Toronto; he was barely an afterthought in Vanney’s lineup planning in 2016, and he somehow fought his way into a locked-down starting spot after Armando Cooper and Jonathan Osorio struggled early this year. His resurrection as one of the Reds’ most defensively reliable midfielders has been almost as impressive as the dominance of his star teammates.

Vazquez and Deglado are the third and fourth changes from TFC’s 2016 MLS Cup lineup.

I can’t adequately explain how incredible Altidore’s goal was against Columbus. The hold-up play from Giovinco, the coolness of Vazquez’s lay-off, the finish (OFF AN INJURED ANKLE, NO LESS) - it was beautiful. I’ve seen a couple people rating it among the best goals in TFC history, which may be an overstatement, but contextually it’s definitely up there.

Anyway, hopefully Altidore is healthy enough for this game. He’ll certainly start, and he obviously feels very strongly about making an impact on this game, but it’s worrying that he’s barely trained this week.

As for Giovinco, I really hope he can find a touch of magic in the cold. I think he’s struggled a bit in the past when it’s been really chilly, but TFC could win this Cup on just one great moment from the Italian.

This very strike partnership was held scoreless a year ago. Let’s hope they find a way through this time. 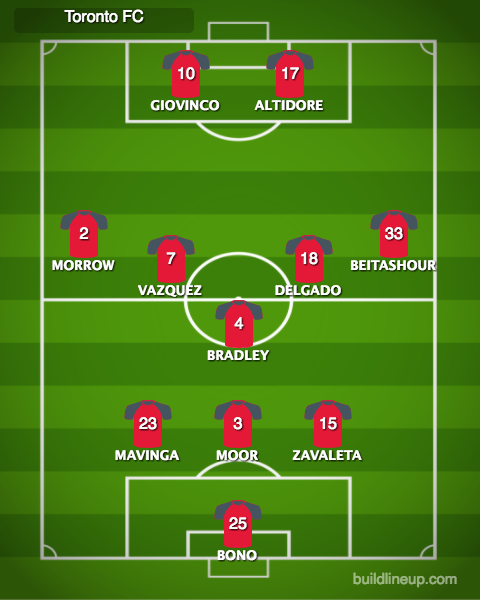 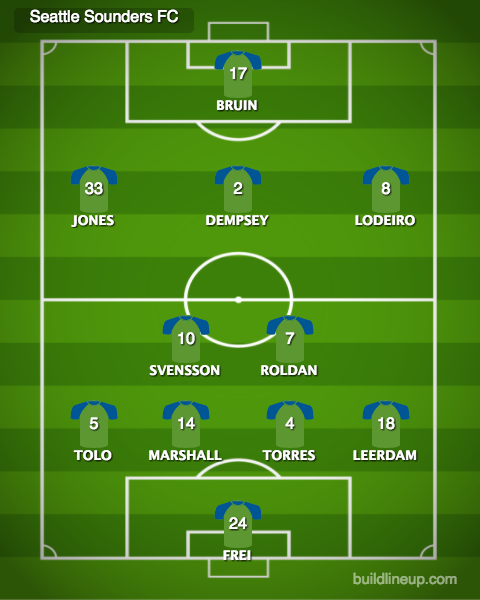