The long wait is nearly over.

Finally, we’re back. After a layoff that might’ve actually felt longer than the offseason, Toronto FC are in Ohio this week for the first leg of the Eastern Conference final against the Columbus Crew.

Of course, as has already been beaten to death, Sebastian Giovinco and Jozy Altidore won’t be joining the Reds at Mapfre Stadium. So for the first time in a few weeks, Greg Vanney’s got some serious thinking to do with his lineup.

Other WTR writers have already had their say in the past week about what the starting XI might be. For a game like this, though, it can’t hurt to have a little more debate.

Personally, I’d put money on Vanney opting for a 3-5-1-1, with Victor Vazquez slotting in as the link between midfield and Tosaint Ricketts up top. Something that might be interesting for the away game - though so might be a 4-2-3-1, with Michael Bradley and Benoit Cheyrou together as defensive midfielders. That’s a more defensive look for a game where a draw might be a good result; it’s probably a little late in the season to be experimenting like that, though.

The 4-2-3-1 is also the way Columbus is likely to line up, of course, which might make life a little harder for TFC if they were to opt for that.

I’ve been racking my brains for a good U2 reference to make here and I just can’t. It’s a beautiful save? I dunno. Please comment suggestions.

This is the back three that gives Toronto the most diversity, I think. Mavinga is pacey and an incredible tackler. Moor is the lieutenant to General Bradley, he keeps things sane back there. Hagglund picks every long ball out of the air, no matter what.

If one of the three is likely to sit, I actually think it’ll be Mavinga, not Hagglund. Not only did he pick up a bit of a knock in the last game, but he also pulled himself out of position a few times by tracking too far forward; that’s not really a risk TFC will want to take on the road.

If Vazquez is pushing further forward, Osorio will come into the midfield to replace him. Vanney’s leaned on him pretty heavily as a sub lately, and I thought he did a great job late in the last NYRB game playing keepaway with Giovinco (see my piece on Seba’s game for some examples).

I’m not totally confident Delgado will be in, but I’m not really sure who would play instead. He struggled a bit against the Red Bulls, caught behind the play a couple times. Maybe Cheyrou gets a look?

Also, pretty much no question for me that Beitashour’s in over Nicolas Hasler. Away from home, without the top two strikers, TFC need to be defensively sound. Actually, I think the only way he’d start is if he played up front.

It might work, it might not, but TFC don’t have a lot of other options. Ricketts has definitely had plenty of looks at the Crew this year, so that’s a positive. He also might have a knack for scoring clutch goals in conference finals.

Vazquez might be needed to bang in a goal himself, which isn’t something he’s typically been used to. He certainly can, though. Maybe he’ll get another chance to score a free-kick under the wall. 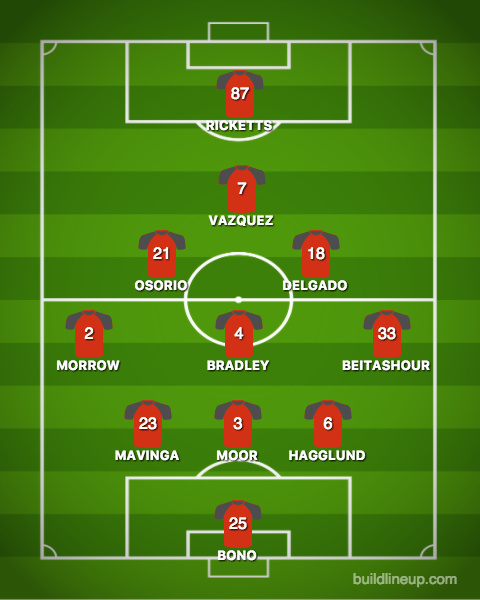 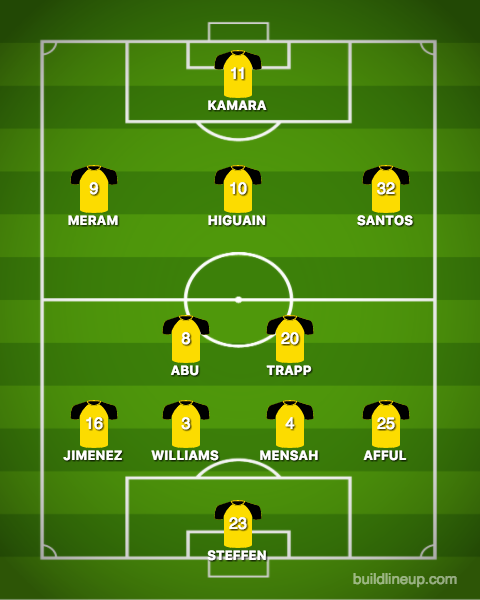