The Loons come to town for the first time. Who will TFC send out to greet them?

This five-game winning streak has been so long that Toronto FC have had time to settle into a regular starting XI, and then blow it up completely. With so many games in so few days, TFC have needed to rotate a lot of players in the past couple of road fixtures.

This weekend, the Reds return to BMO Field to meet Minnesota United for the first time. Despite their tough start to the season, the Loons might not be as bad as we all thought they were when they got shelled 6-1 by Atlanta. Minnesota sit seventh in the West, and have gone 3-2-1 in their last six games.This probably won't be the walk in the park a tired TFC team may have been hoping for.

Unfortunately for me, this part of the prediction is difficult again. It would make sense for Irwin to get the nod in this game, with Bono playing on Wednesday in Columbus. It might take another few games before Greg Vanney settles on a No.1 again, especially with the schedule so clogged up right now.

Like everyone else, it seems, I was surprised when Vanney took Mavinga off early on Wednesday. He looked about as good as he has at any point this season. I think Justin Morrow is likely to get a break on Saturday, so Mavinga would be the obvious choice to slide back in.

One of Hagglund or Zavaleta could be switched out for Jason Hernandez - particularly Hagglund, who's been outstanding recently but has played a lot of minutes. The centre-back has commanded the 18-yard box brilliantly, using his height to swallow up the high crosses that TFC's midfielders force, but at some point he's going to need a night off. I wouldn't be surprised if this is the one.

Edwards has to have won himself another start with his performance in Columbus. He was dominant from the moment he stepped onto the field, and without him it's unlikely TFC would've salvaged even a point. Vazquez, too, was magnificent in the latter stages against the Crew. He'll hopefully be good to go, although he may need to swap out after 60 minutes or so.

Surely Bradley has to be rested for this one. He's played every minute of every game so far, including four in the last two weeks. The captain's importance to TFC's midfield cannot be understated, but there's no way he can play every game, right? Right?

Besides, Cheyrou looked very good in both Seattle and Columbus. He doesn't quite fill the same role as Bradley, but he can still effectively dictate the play in midfield.

Beitashour is almost a lock to step in on the right again. Other than Bradley's, his position might be the most static on the team. If he's fit, he goes in at right wing-back. The midfield spot that's always difficult to pick, on the other hand, is the player on his left. I think Delgado is still the best option there, especially after sitting on Wednesday, but Armando Cooper also probably deserves another shot. Jay Chapman could also step in after a couple of strong road performances.

It looks like Giovinco will be fit to play on Saturday, which means Jozy Altidore will probably be given the day off. Now, the question becomes who will slot in beside him. The logical choice is Ricketts, who might have earned himself a start with two huge goals on Wednesday. Were it not for that, though, this match might've been an opportunity for Jordan Hamilton to get a run out, or even for Ben Spencer - who has now been loaned down to TFC II - to make his debut.

I'm not convinced that Giovinco and Ricketts play well together, and Hamilton could probably fit into this lineup well, but it's hard to bench a player who scored a brace in the last 10 minutes. 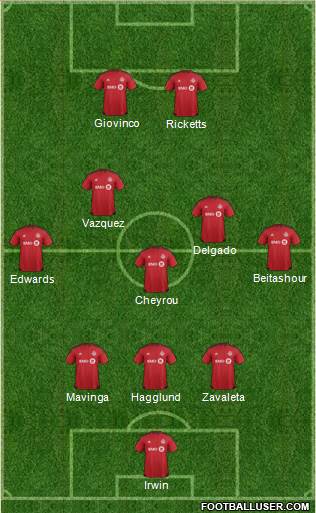